In the recent days I was reading technical analysis of win32k exploits from recent years, and it caught my eyes, that the HMValidateHandle technique is very heavily used almost everywhere. Then I had an idea how to protect against this family of exploits, which I think is very simple. This post will be about that.

HMValidateHandle is an internal, unexported function of user32.dll. It takes a handle and a handle type as arguments, and by looking up the handle table, if the handle is matching with the type it will copy the object to user memory. If the object contains a pointer to itself, like tagWND it can be used to leak memory addresses from the kernel. This has been a known technique for very long time, I think the first mention of this was in Tarjei Mandt’s 2011 BlackHat US talk, you can find the PDF here: https://media.blackhat.com/bh-us-11/Mandt/BH_US_11_Mandt_win32k_WP.pdf There are awful lot of documentation about this, and it was widely abused in many-many Windows kernel exploits, as you could reliably leak kernel object addresses, especially useful for kernel pool spraying. Thus Microsoft decided to finally close this, and so this technique doesn’t work beyond Windows 10 RS4.

Getting the address of HMValidateHandle

Conceptually it’s very simple. This function is frequently called from inside user32.dll so we just need to parse through it, and grab / calculate its address. The most common technique is locating the IsMenu function in user32.dll:

Then parsing through it, and calculate the address of it. It’s being called very early in the function, and the opcode E8 will indicate that, we can go from there.

Here is how IsMenu function looks like in the latest Windows 10 version: 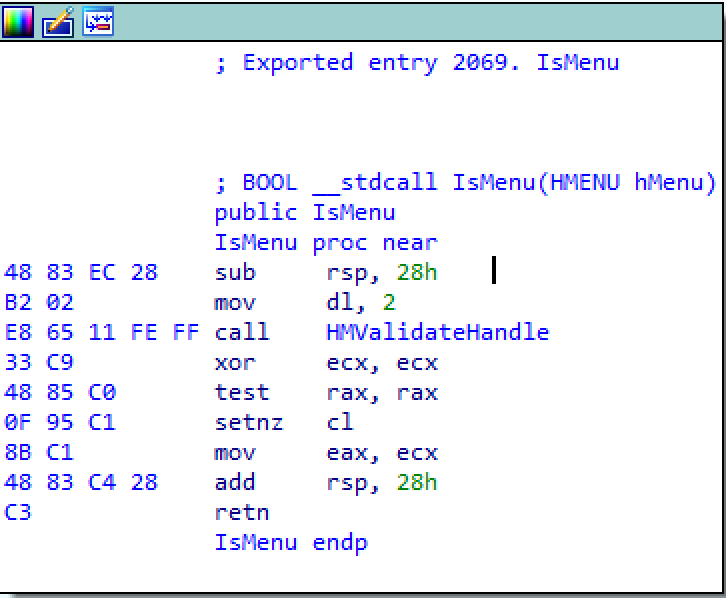 Simple enough? Likely this is why this was chosen. However you could chose many other functions, as you can see below. 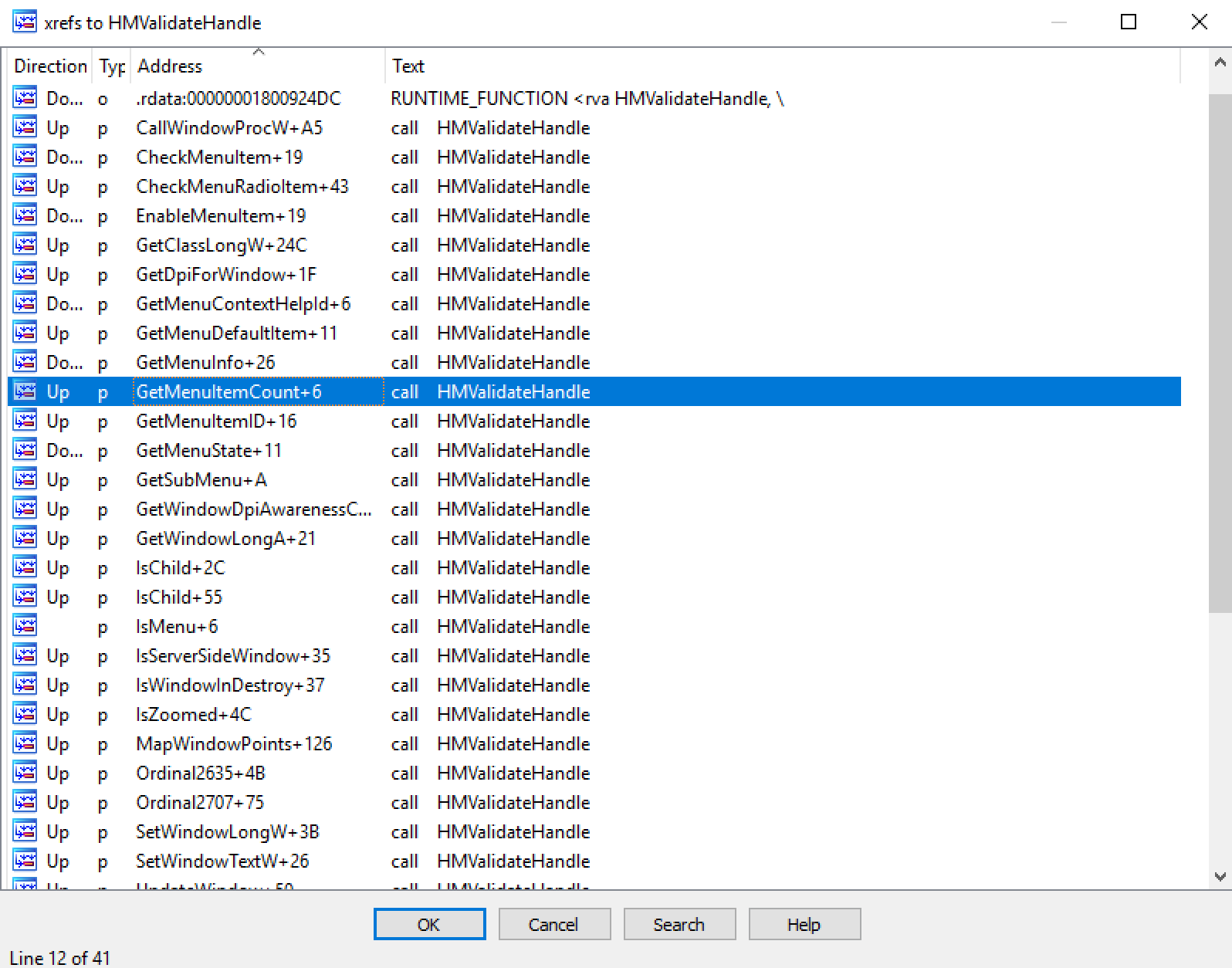 For example picking up GetMenuItemCount would be similarly easy: 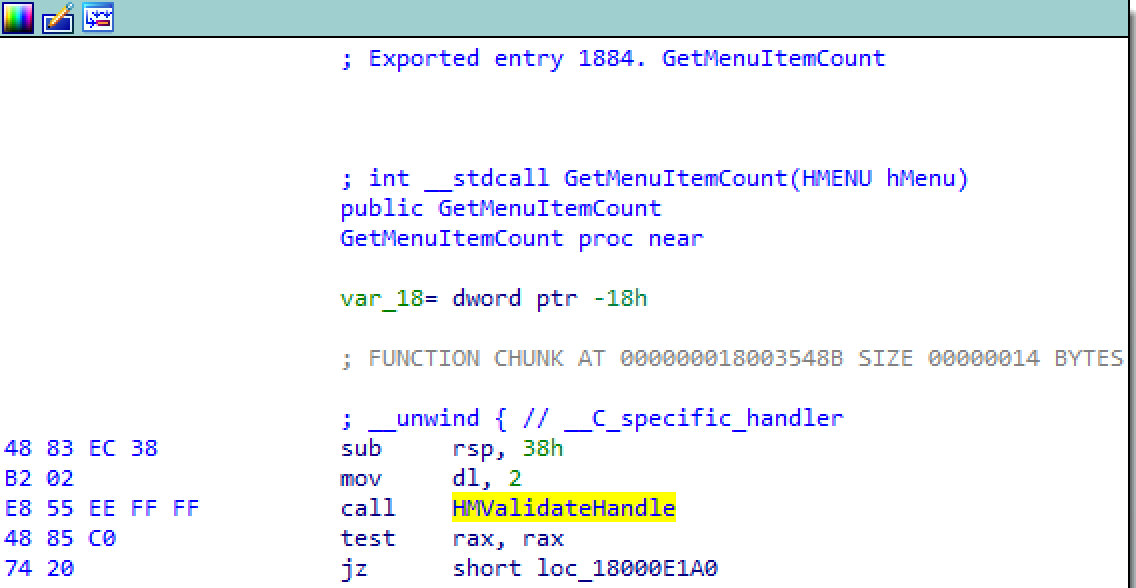 Likely the only thing you would need to change is this:

and maybe the offset calculation at the end because of some nops, but otherwise easy-peasy.

In older versions of Windows it was a bit less used, but still pretty good, this one is from Windows 7 x86: 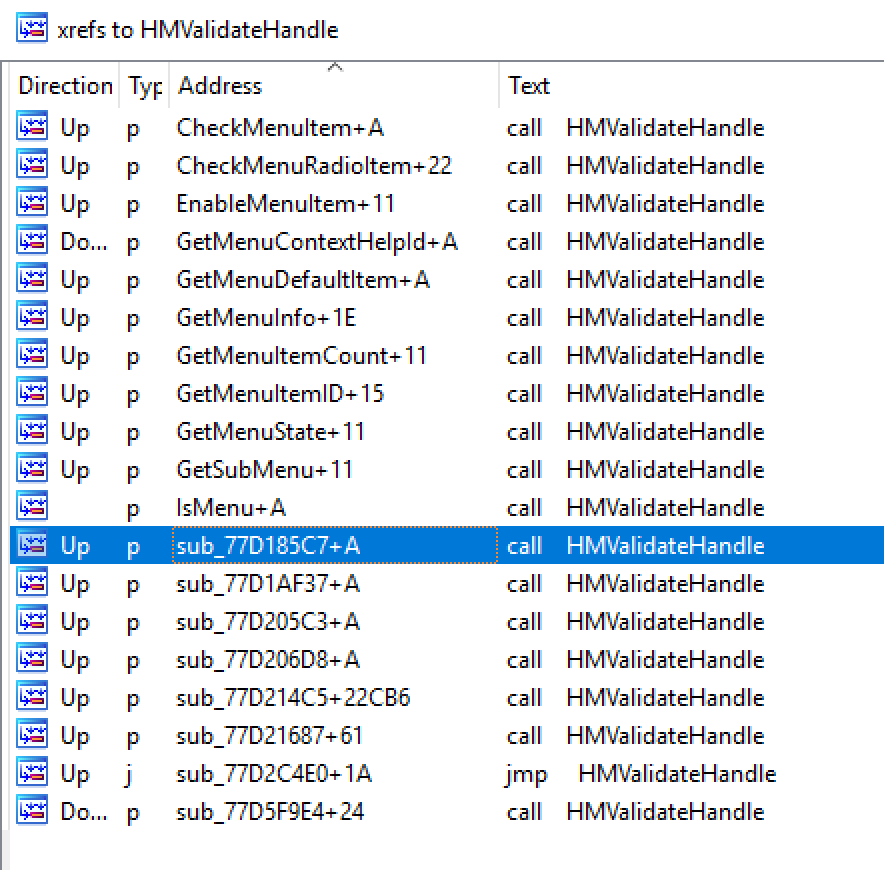 Protecting against the technique

Although with Windows 10 RS4 the problem is gone, there are still a big amount of machines out there, which are affected. The idea is very simple. Under normal circumstances HMValidateHandle will be only called from inside user32.dll. If we hook this function in user mode, and then check the call stack, we can easily spot if the call is a valid call, or an exploit abusing it with directly calling it from outside user32.dll. Most AV vendors implement user mode hooks as you can’t hook everything in kernel mode (like this), so adding one more, really shouldn’t be that difficult and it would significantly increase protection against such exploits.

I personally never implemented hooking in Windows, so wanted to experiment with this and see if my idea works or not. I saw earlier that some AV products use Microsoft’s Detours, so I thought that will be good for me as well.

You can get the Microsoft Detours source code from here: Releases · microsoft/Detours · GitHub. Once downloaded, open a VS Developer Command Prompt, and type: nmake This will build all the examples, create the lib files, etc… Now repeat the same with the x86 / x64 version of the Developer Command Prompt, in case you need both versions. Place the include and lib files to the location of your choice.

In you C / C++ code you need to include the header:

In the Project -> C/C++ -> General -> Additional Include Directories add the folder where the header files present.

That’s all you need.

It is super easy. I’m not a coder at all, but it was easy even for me. Essentially you can take this example from the official WiKi page: Using Detours · microsoft/Detours Wiki · GitHub and change it. This is what I did. This is how you hook:

and this is how you unhook:

pHmValidateHandle contains the address of the original function you want to hook and ProtectHMValidateHandle is my function which is implementing the alternate functionality.

Again the basic idea is to verify if the call is coming from user32.dll vs. somewhere else. For this we need to verify the call stack. First I was afraid that I will need to do some assembly magic for that, but luckily Windows has an API to retrieve items from the stack, and the function is: CaptureStackBackTrace, MSDN: CaptureStackBackTrace function - Windows applications | Microsoft Docs. It looks like this:

What is important to us is: FramesToSkip will tell the function how many frames to skip when getting values. I set it to 0, so we don’t skip any (although could set 1, see later why). FramesToCapture will define how many entries we want. BackTrace is a pointer to a location, which can hold the data read from the stack.

I read two frames from the stack (or could skip the first and read only the 2nd), because: 1st frame - will be the trampoline function that is present because of the hook. 2nd frame - the original caller of the HMValidateHandle function.

To demonstrate this here is an output from my hook:

We can see that that the 1st frame is always pointing to the same place, the trampoline function. The 2nd frame is the original caller, in case of IsMenu the address falls in the range of the user32.dll code segment, while in the second case where I call the function directly, like you would do in an exploit, the return address is pointing to somewhere else.

If I see an exploit attempt, I simply quit the process. I put the entire code to GitHub under my kex library: kex/HookHMVH at master · theevilbit/kex · GitHub

and compiled it again with that. The normal version worked as expected:

However when I run it with my DLL loaded, it failed: 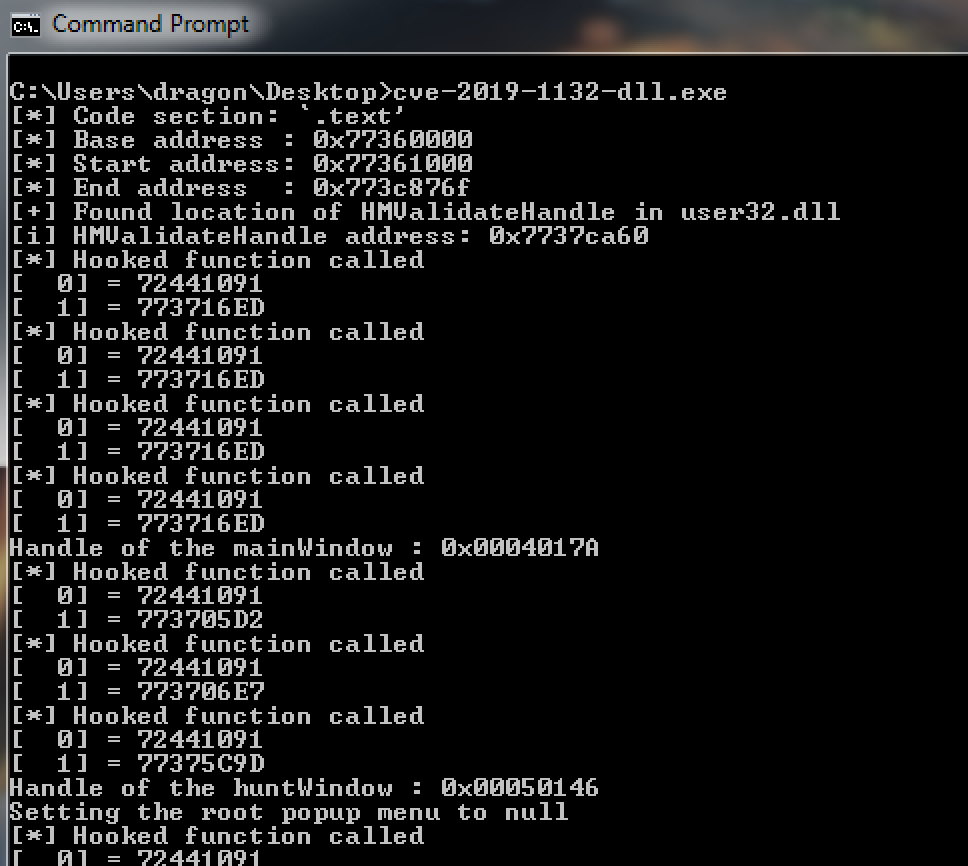 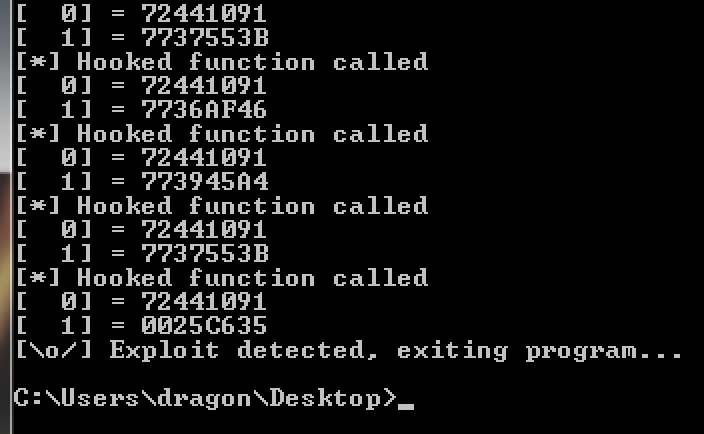 It was outside of my attempt to universal hook every process in the system, you will likely need a kernel driver for that. AppInit_DLLs won’t work here, because it’s being loaded when DLL_PROCESS_ATTACH is hit in user32.dll, so that DLL is not loaded yet, in fact you can rely only on ntdll.dll and kernel32.dll at that stage.

Conclusion of the protection

Although I didn’t test it extensively if it creates false positives or not - although if yes I would take a look at that binary - I’m pretty confident that it should work universally. It will handle all cases, no matter from where you get HMValidateHandle’s address. Not sure if any exploit protection products are using this trick, but it should be pretty easy.

As noted by others, I almost forget to mention one thing. Obviously you can bypass this protection if you mimic what the function does, and never call it. Essentially there is another well known technique for achieving the same, which is getting to the DesktopHeap where all these structures are stored and parse the heap. This method is beyond the scope of this post, but if you want to read about it, here are some awesome resources: