This is the first part of a blog post series I plan about PrivilegedHelperTools that exists on macOS systems. I recently took a look on a couple of these tools, and found that it’s very easy to make the code insecure, as there are many small pieces to it, and if one is done wrong, the helper tool will be open to abuse by anyone having a foothold on the system. Depending on the application this might be limited to certain privileged actions (setting system configurations, mounting, etc…), and in some cases it’s more broad, and thus a full privilege escalation can be performed. Ideally only the real client application should be able to talk to the helper tool, and all other connections should be refused.

For those who are not familiar with the concept here is a very short overview. Essentially this is part of a factored application, that is designed to perform certain privileged actions (typically would require root access) on behalf of the application. The idea behind this is that your application can be run as normal user, and if something privileged has to be done, it can turn to this tool. The helper tool will run as a different process, under different privileges and different sandbox rules. This is good from many perspectives, it will limit the possibilities of a potential privileged escalation compared to the case if the entire application is running as root, and it will also make the application more reliable, as if there is a crash in this tool, the main application can still run, and the helper can be restarted safely. Communication between the main application is happening over XPC, which under the hood uses Mach services. An XPC is an interprocess communication in macOS, and recently it became the standard for any of that. No one knows what XPC stands for. I will cover some XPC related stuff as we go into the examples.

I highly recommend reading through Apple’s authorisation concepts and their EvenBetterAuthorizationSample code for the following part, here:

I will cover some parts of that very high level, and mainly why is it not sufficient for a privileged helper tool. This will be done through going through some parts of the code. The idea behind this part is to show why this sample, which is widely used doesn’t authenticate/authorize the client properly. I’m not a developer, so if I made an error here understanding the code let me know. With that let’s see how we establish a connection.

On the main app, we simply create a new XPC connection: App-Sandboxed/AppDelegate.m

On the helper tool side we simple accept it (going forward a bit this is the function that I will talk about later many times, this is where the client verification will need to happen):

This is pretty standard code, and based on that we can see that any client application will establish an XPC connection to the helper tool, as it accepts everything. OK, but we have this Authorization thing, will that help? Obviously no, this is why I write this, but let’s see why.

First it will setup an empty authorisation reference and make an external form for it, as that is need to pass authorisation information between two distinct processes (the helper tool and the main app). Normally this should succeed, again, you didn’t really asked for any rights here.

Moving on it will call setupAuthorizationRights

This function can be found in the application’s XPC service, which is a regular XPC service, not to be mixed with the PrivilegedHelperTool. App-Sandboxed/XPCService/XPCService.m

This will call the function from Common/Common.m. I think this can be very confusing for first read, and honestly I totally misunderstood it for the first time. The enumerateRightsUsingBlock will iterate over specific authorisation entries defined in the application. Normally these are the authorisation rights that an application want to setup in the authorisation database. I will shortcut here, and won’t show how that works, but I encourage everyone to read the links I provided in the beginning. So while iterating over them, we will call AuthorizationRightGet - Security | Apple Developer Documentation. This function will check if an entry is already in the database or not. Note that it doesn’t need the authRef, as the database is world readable. The AuthorizationRightSet part is not so important for us, because if the application is already installed the entry will be in the database.

Now that is done, our authorisation reference and external form is ready. Note that what happened is only setting up an EMPTY authorisation, without any rights! Anyone can do this.

Let’s see what happens when we call one of the functions of the helper tool. Let’s take writeLicenseKey for example: HelperTool/HelperTool.m. It will call checkAuthorization

checkAuthoriation will first verify if the AuthorizationExternalForm is valid or not, again no check for rights, and then create an AuthorizationRefernce from it. Then setup an empty authorisation right set, and will copy the required right name into it at authorizationRightForCommand. The important part happens at the AuthorizationCopyRights, because this is the point where the actual authorisation happens! This is important because what we see here is that the HelperTool will be authorized and not the actual client. The flags are set that if needed the helper tool can interact with the user (ask for password), but it doesn’t have to.

Let’s go back to the authorisation rights that will be entered into the authorisation database, because that will define if a user has to authenticate or not. This can be found in Common/Common.m. The important part is the kCommandKeyAuthRightDefault, if that is set to kAuthorizationRuleClassAllow it means that authorization will be granted if other criteria is met. If set to kAuthorizationRuleAuthenticateAsAdmin a popup will be displayed to the user. However this will come from the helper tool asking for authorisation and not the actual client, so a user will likely happily authenticate.

So to summarise, why this model is not sufficient:

After the detailed analysis of EvenBetterAuthorizationSample let’s see a real world example.

ProxyMan is a web debugging / proxy tool for macOS. Upon installation / first run, it installs a privileged helper tool, which is later used to change the proxy settings by the application. Changing proxy settings is a privileged action by default, and requires user authentication before doing that, with the use of the Helper tool the application can always change the proxy without doing constant user authentication. Normally the helper tool should only work with the main application, however due to incorrect coding any user can interact with it and change the proxy.

Kudos for the developer Noah Tran (@_nghiatran) as he fixed the issue in a couple of days.

This application uses Apple’s old developer guide (EvenBetterAuthorizationSample) . As we saw using this example means that when someone is connected we can either just get authorisation without any further prompts if the AuthRight is set to @kAuthorizationRuleClassAllow, which is the case most of the time, including this app. Even if it’s set for prompting, we can still talk to the tool, but at least we will need to get the user’s consent.

It’s clear that ProxyMan used Apple’s sample code for implementation, we can see that for example by comparing Apple’s source:

and the decompiled code of the HelperTool: 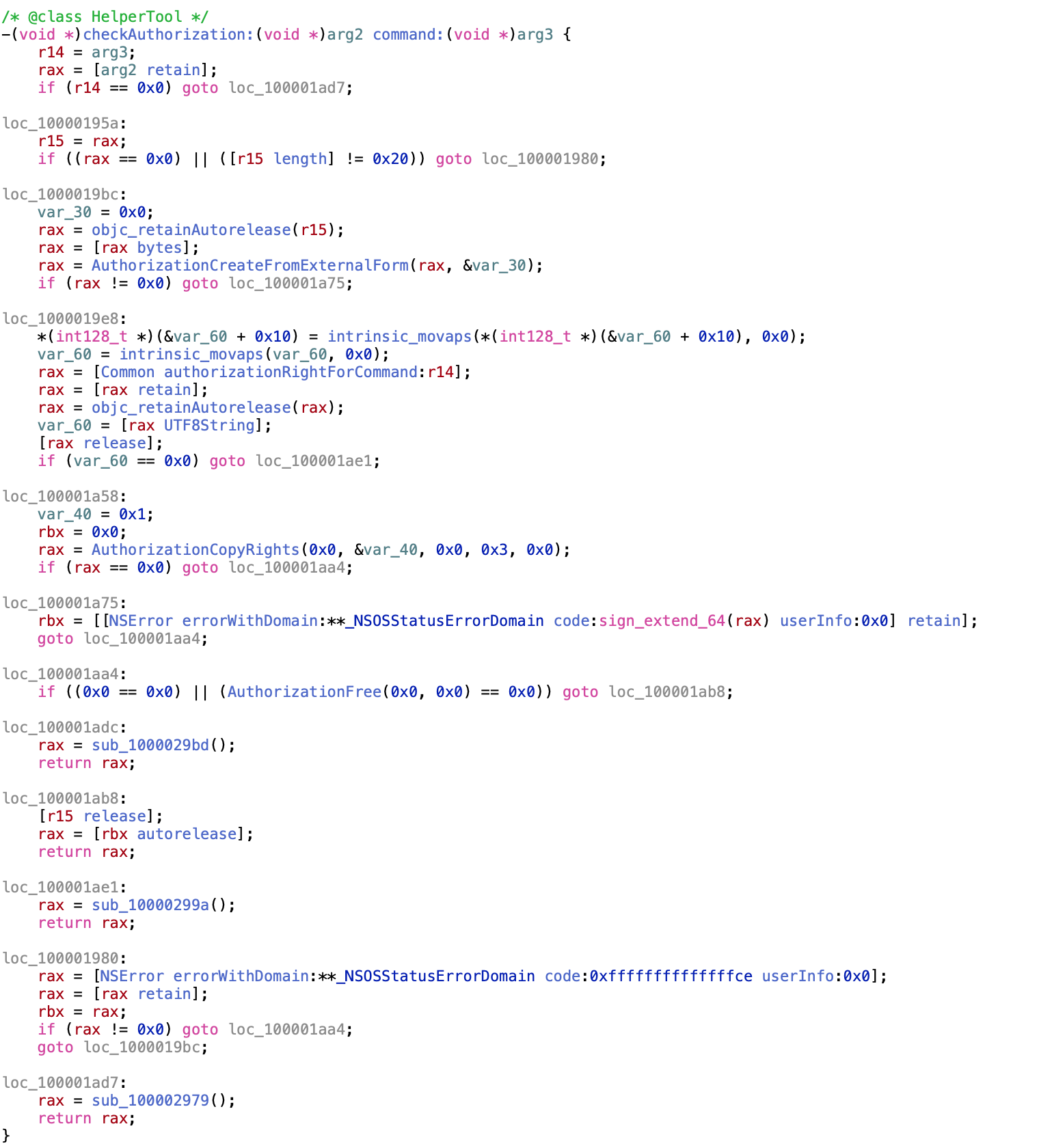 It’s rather easy in this case. We can easily implement the client based on Apple’s original source code, replace the relevant constants, and call the helper tool via its interface. First we define theHelperToolProtocol, which we can easily get with class-dump running against the helper tool.

Then just use Apple’s source to setup an empty authorisation as we saw earlier.

Full POC can be downloaded from here: exploits/CVE-2019-20057/PMCocoa at master · theevilbit/exploits · GitHub

Fix such and similar issues

I will repeat this in every bog post I write on this topic, spoiling also the coming ones, but I think it’s important.

For identifying the client at first place, the audit_token should be used instead of the PID, as the second is vulnerable to PID reuse attacks.

as these entitlements would allow another process to inject code into the app, and thus allowing it to talk to the helper tool.

Part 2 - will talk about the client part, why it has to run with hardened runtime and why the above entitlements are a big NO. This will likely come only in April, when the example I want to cover is fixed. Part 3 - will talk about why the minimum client version is important. Date is unknown yet, as there is no ETA for the bug fix, which I want to cover.